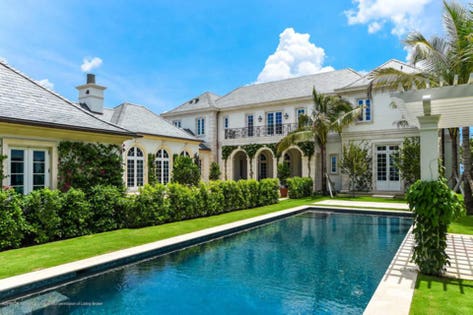 The eight-bedroom mansion on the oceanfront in Palm Beach, Florida, is a reminder of the Gilded Age. But, no one has ever lived in it.

It’s a eight-bedroom, 14,000-square-foot spec house developed by English native Sir Peter Wood, who lives next door. He built the French Provincial-style mansion after tearing down a house where Jimmy Buffet and his wife, Jane, once lived.

It’s about a mile from Mar-a-Lago Club, the resort owned by President Donald Trump. So, it’s close enough to make it a short jaunt to an al fresco dinner on the club’s patio, yet far enough away to not be house-bound by traffic jams when the president comes to town.

The street it’s on, South Ocean Boulevard, was recently cited as one of the top 10 most exclusive address in a global ranking by Knight Frank and Douglas Elliman Real Estate. The brokerages sorted luxury addresses by the number of residential sales priced above $25 million during the last five years.

Streets in Manhattan, Hong Kong, and London all ranked above South Ocean Boulevard, which was listed in the No. 10 spot. In the last five years, there were 10 transactions price over $25 million on the boulevard, at an average price of $34.5 million, the report said.