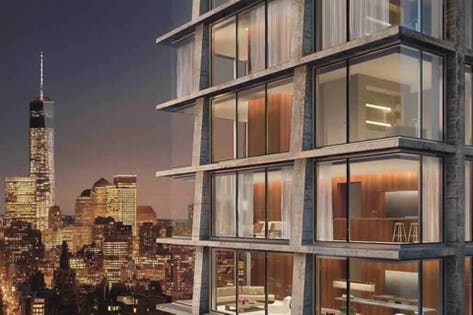 Luxury real estate in Manhattan, where the median sale price is quadruple the rest of the U.S., had a terrible 2019 as the market adjusted to new tax laws.

Measuring transactions that sold for more than $4 million, the number of signed contracts fell 16 percent to 935 in 2019 from 1,108 a year earlier, and the volume fell to $7.7 billion from $9.1 billion, according to a report from Olshan Realty.

There was a glimmer of hope at the end: during the last full week of December, buyers signed 11 contracts for units, on par with 2018, even with the Christmas holiday in the middle of the week, said Donna Olshan, president of the brokerage.

“When you consider the annus horribilis in Manhattan residential real estate, last week’s total was an encouraging continuation of the recent uptick in the luxury market,” she said.

Manhattan’s luxury real estate struggled as a new “mansion tax,” implemented July 1, sapped demand. Even though the name refers to townhouses, it applies to all types of residential properties.

It was also the second year of the Republican tax law passed in the final days of 2017 that capped deductions for state and local taxes, known as SALT, at $10,000. That made it more expensive to own real estate in the priciest areas of the country, such as New York, New Jersey and California.

Many market-watchers saw it as a form of political retaliation, because the areas that were hardest-hit were so-called “blue states” that didn’t vote for President Donald Trump. On Dec. 19, a day after impeaching the president, the U.S. House of Representatives voted to nix the SALT cap. The bill, HR 5377, now goes to the Senate.

The Olshan report covers signed contracts, giving an early glimpse of the Manhattan luxury market’s performance. The last report giving hard numbers for completed transactions was in October, showing the third-quarter median sale price for the overall market dropped 17% from a year ago to $999,950.

It was the first time it dropped below $1 million since 2015, according to CORE, a New York brokerage. Fourth-quarter sales numbers will be reported in early January.

“Market prices have gone from what was once described as the kindest, gentlest correction to a near free-fall,” said Garrett Derderian, CORE’s managing director of market analysis, said Oct. 1. “The last time conditions were described in such a way was in the height of the recession.”