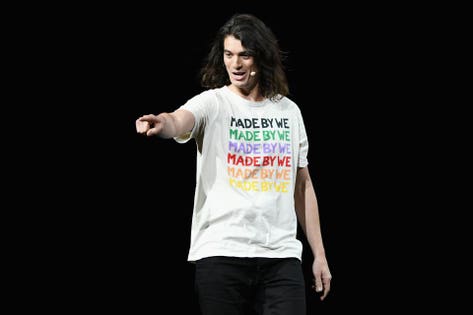 Earlier this year, Adam Neumann appeared on Forbes’ list of the world’s richest people with a net worth of $4.1 billion. Today, Forbes is lowering our estimate of his wealth to at most $600 million. WeWork declined to comment for this article. Neumann had no comment.

The WeWork cofounder’s swift fall from the billionaire ranks is the result of the co-working company’s failure to complete an initial public offering, pulling it’s plan 47 days after publicly releasing offering statement filed with the Securities and Exchange Commission. Neumann was forced to resign as CEO amid the backlash, but still owns an estimated 18% stake in the nine-year-old company.

Neumann first appeared on Forbes World’s Billionaires List in 2016 with an estimated net worth of $1.5 billion. He was 36 years old and private investors had just valued WeWork at over $10 billion. In the three years that followed, Japanese telecom giant SoftBank plowed billions more into the New York company in multiple funding rounds, ultimately valuing it at $47 billion in January.

“I told Adam not to be proud that WeWork was growing organically without a large sales force or spending big marketing dollars,” Softbank boss Masayoshi Son told Forbes after Softbank’s first investment in 2017. “Make it ten times bigger than your original plan. If you think in that manner, the valuation is cheap.” Adding, “It can be worth a few hundred billion dollars.”

Neumann’s resignation took place after it became clear that public market investors were not nearly as enamored with Neumann as Masa Son was, and did not believe the We Co, as it is now called, to be worth as much as Son did.

There’s good reason to feel that way. IPO filings indicate that We has just enough cash to keep operating until the middle of next year. Without a large infusion of capital–such as an IPO would have provided–or substantially cutting costs, the two new co-CEOs could be forced to file for bankruptcy, several analysts say.

“They need to get to a place where their locations are able to generate real income,” says Laura Kozelouzek, founder and CEO of Quest Workspaces, which operates a dozen co-working locations in New York and Florida. “Scaling back is helpful, as is selling the corporate jet, but right now if the market goes down in any way–and I expect it will–they won’t be able to climb out of the hole they’re in.”

As it stands, Forbes now estimates the We Co. is worth at most $2.8 billion. That valuation is based on a multiple of the company’s revenues consistent with publicly traded competitor IWG; given the sudden asset sales and the potential cash flow crunch, Forbes applied a discount to the price/sales multiple for IWG when calculating We Co.’s estimated worth. We Co. had a net loss of $1.4 billion in the first half of this year.

“No one will believe again that having an app for booking a conference and makes you a tech company,” says Scott Galloway, a professor of marketing at NYU Stern School of Business and an out-spoken WeWork critic. Adding, “If the new co-CEOs come back with a harsh but feasible plan, they announce new capital from SoftBank, this could be a company where it’s I would call it $5-to-$10 billion–if they execute perfectly.” Until then, “This really could get very ugly very fast for a lot of people.”

Our estimate of Neumann’s wealth is based on his stake in We Co., plus an estimated $500 million in stock sales, less $380 million he owes on a line of credit, which was detailed in the company’s public offering statement. The filing also shows that Neumann last sold shares in the company in October 2017 and that 15% of the value of his past sales have been donated to charity.

We estimate cofounder Miguel McKelvey’s stake is now worth $400 million, down from a peak of $2.9 billion in March this year. However, it is unclear if, like Neumann, McKelvey sold shares in earlier funding rounds. If he did he could be worth more.