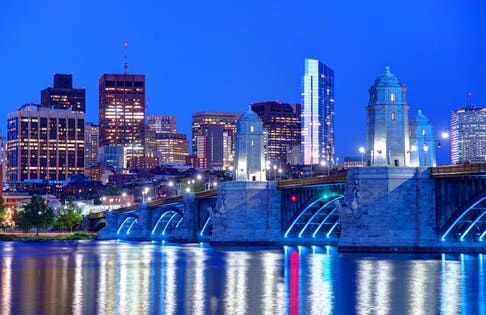 For nearly one half-mile over the Charles River in Massachusetts, the Longfellow Bridge between Boston and Cambridge carries on as a multimodal model of reliability for 21st century transportation demands.

To say it mildly — with daily reliance by 90,000 riders on the rapid transit Red Line over its two rebuilt railway tracks, along with 28,000 cars, trucks and other motor vehicles driving three vehicle lanes, plus two bike lanes and two ADA-compliant sidewalks — the Longfellow Bridge is a landmark in the region’s transportation system.

The Massachusetts Department of Transportation (MassDOT) and its project team from the private sector restored and adapted the bridge over a phased, five-year period, culminating with the full beneficial use milestone opening in 2018, at a cost of around $300 million as part of the $3 billion Massachusetts Accelerated Bridge Program.

The Longfellow Bridge Rehabilitation Project will be presented with a Richard H. Driehaus Foundation National Preservation Award, one of only three winners in the juried competition. The awards will be presented at the National Trust for Historic Preservation’s PastForward 2019 conference this month in Denver.

The National Preservation Awards recognize historic preservation efforts that demonstrate excellence and have positive impacts on the vitality of their cities and places. The Driehaus award is the latest in a string of honors this year for the Longfellow Bridge project, including those from the following organizations:

Opened in 1906, and called the Cambridge Bridge, the engineering feat relieved traffic congestion by replacing an existing timber-pile bridge from the late eighteenth century. By 1927, the state legislature of the Commonwealth renamed the bridge to commemorate American poet, and Massachusetts resident, Henry Wadsworth Longfellow. Later, the Longfellow Bridge was listed on the National Register of Historic Places in 1978, as one of the contributing structures in the Charles River Basin Historic District.

The historic structure even took on a nickname, affectionately referred to as the Salt and Pepper Shaker Bridge – or Salt and Pepper Bridge, for short – due to its signature pairs of four granite-faced neoclassical towers flanking the bridge’s center span, that many think resemble shakers.

Crews worked with meticulous attention to the historic architectural elements of this award-winning project. The 500-plus granite stones that comprise each 58-foot tower were removed, cleaned and reassembled with help from a construction crane on a barge in the Charles. The towers were also reinforced with concrete liner walls. Cast-iron guardrails were restored and reinstalled, and historic light posts and lamps, many of which had gone missing decades earlier, were replicated for installation. A new component, blue illumination was introduced beneath the 12 arches, intended to complement and highlight the infrastructure. The bridge’s LED lighting system won a 2018 award for heritage lighting from the LIT Design Awards.

Valuing engagement and creativity from the earliest planning stage, MassDOT leadership was committed to welcoming broad public participation, and convened the Longfellow Bridge Rehabilitation Task Force in June 2010. MassDOT engaged the Massachusetts Office of Public Collaboration, at the University of Massachusetts Boston, to act as a neutral forum and to design and facilitate the task force process.

Through it all, in addition to recommendations for the adaptive configuration for bridge uses, an initiative grew out of the Task Force to have devised a continuous system of equitable connections on both sides of the river for pedestrians and bicycles to the bridge’s approaches and to the Charles River Basin parklands. The support of the Task Force was contingent upon such connections. In the end, the collaborative effort fostered innovations in project configuration and connections that were reflective of the recommendations submitted by the Task Force.