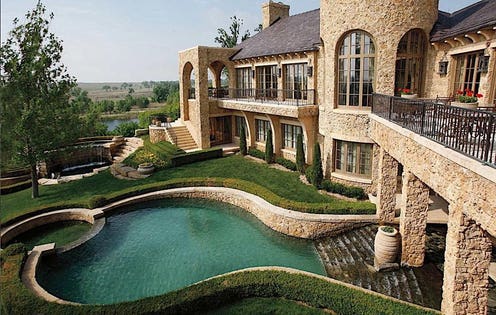 The Mesa Vista Ranch in the Texas Panhandle, owned by the late T. Boone Pickens, has been on the market since 2017 for $250 million and is going to maintain its asking price for now, even after Picken’s passing last month, according to a rep for the listing. The sprawling property stretches over 100 square miles and comes with its own airport, 40 bird dogs (who have their own 11,000-square-foot kennel) and tens of thousands of square feet of living space.

Pickens purchased the initial piece of the property almost 50 years ago and began to assemble and reform the landscape to the tune of over $140 million worth of improvements ever since. The largest infrastructure upgrades brought in include thousands of tons of landscaping material to create the varied topography visible in the photos, creating about 20 man-made lakes and dredging the others, as well as creating an extensive watering system for the wild animals over the vast acres.

Above, the Main Lodge is a 33,000-square-foot living space that can be used for conferences, retreats or large gatherings. This is in addition to three other homes on the land—the 12,000-square-foot Lake House, the 6,000-square-foot Family House and the 1,700-square-foot Gate House. Several other features include the airplane hangar, a private church (where Pickens married his fifth wife), golf fairways, tennis court, skeet range and 400-square-foot building referred to as the Gun Room.

A more intimate living room has stone walls and a deep-set fire place.

A large dining room has the unusual touch of all-wood ceilings so it adds to the “lodge” feel of the place.

One of the living rooms in the house is this one with vaulted ceilings, wood floors and working fireplace.

The stone wine cellar (and two-story pub) mean you can entertain an entire crowd for wine tasting on the weekends.

The theater has seating for about 30 people can be used for showing films, hosting performances or a place for talks if conferences are held on site.

The price includes all the equipment needed to keep the ranch running and, according to the listing information, the existing staff is interested in continuing to work on the site. The artwork in the buildings and the 400-head herd of cattle are not included in the price, but can be purchased by separate negotiation.

The listing is repped by Monte Lyons of Hall and Hall and Chas. S. Middleton and Son.